In this world there are many kinds of beautiful; for example, Olivia Wilde, a perfectly grilled steak and the movie Top Gun. All of these are beautiful in their own right, but every once in a while there are things so ugly that they are somehow awesome and arguably, beautiful. Prime examples: the 80s, a bulldog or 50 Cent...okay that was admittedly weak because really those last two look exactly the same, but the point still stands.  So with that being explained with our usual hardy helpings of elegance and grace, here are our Top 5 Prettiest Ugly Cars (under 10k).

(On a separate note, last night I had a dream where I got to eat a perfectly cooked steak while watching Top Gun with Olivia Wilde. mmmmmm...steak) 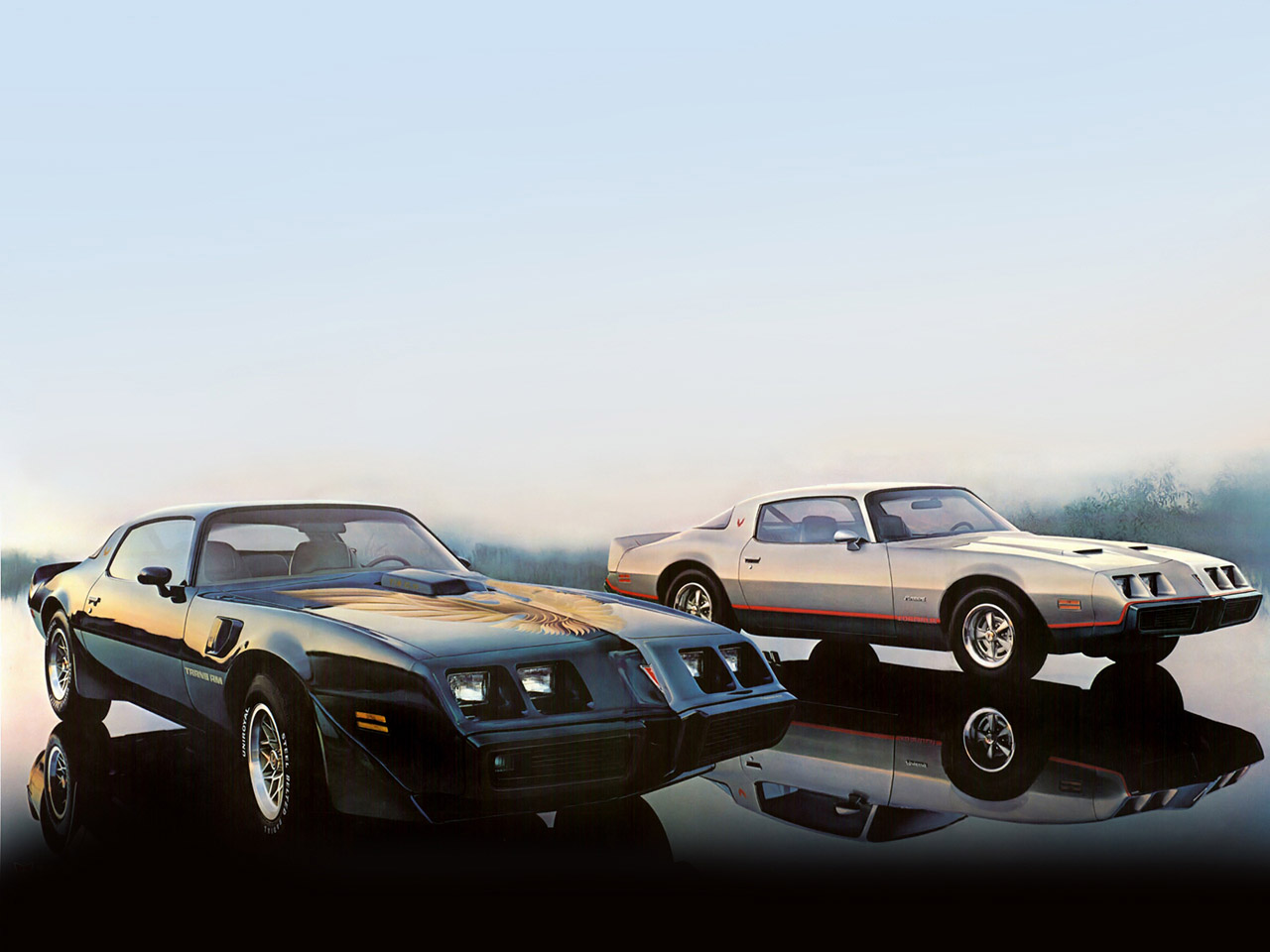 Almost everything about this bird of prey was designed wrong. The pointed-beak front end was both uninspired and poorly implemented. Just because you have "bird" as a part of the name doesn't mean you have to give it a pecker. The Impala doesn't have antlers. The Viper isn't incapable of moving in a straight line or have fangs... well it doesn't have scales anyway. The point is, just because you name a car after an animal doesn't mean you have to give it animal traits. But if you do, pick something cooler than a beak. Why not give it gull-wing doors or make it shoot wings of fire out of the side vents? Dont just cop out and give it some plastic molding.

Despite this, and the fact that the back half of the car wasn't really designed at all, the Firebird looks awesome. Keeping things basic really worked for this car. The sharp-edged nose teamed with the chin spoiler gives the front an aggressive "I'll melt your family" personality. The two curves on the car come on the rear quarter panels, which flows over the wheels and leads directly into a sharp ducktail spoiler. This Pontiac screams speed, anger and violence. Now dont think for a second you will look sophisticated, but if you have a beer belly, use PBR for aftershave and have a solid mustache, this bird will suit you just fine. 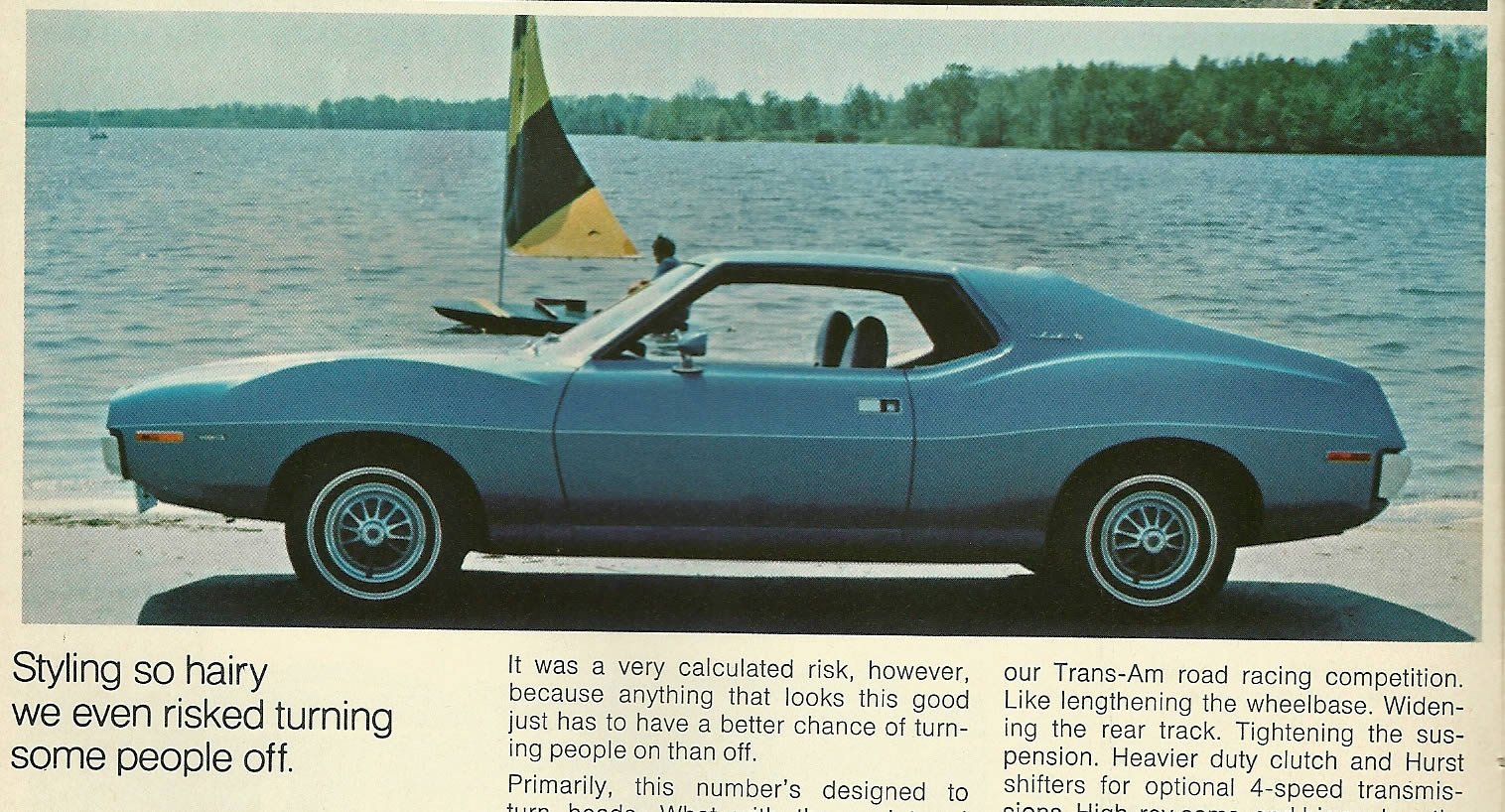 In 1971 AMC introduced its redesigned Javelin. First thing's first, the name Javelin is without doubt one of the top 3 greatest names in the car industry, behind Mustang and Interceptor.  The name of a car is a bigger deal than most people would think. For example, I would bet Jeff's left testy that if the Mustang were originally called the Fru Fru Cuddlekins, the Camaro would have had much more success. It is also why the Ferrari LaFerrari will always be a joke, even with organ damaging performance. So AMC gets bonus points for a creative marketing team.

As far as the figure, they kept the face period correct but AMC wanted to take things in a slightly new direction than other American companies by also including curves. Having the metal pour over the wheel wells, flaring each quarter panel gives the impression of shoulder blades on a prowling Cat. A ton and a halfs worth of prowling super lynx, who's greatest joy is invading its challengers happy place. Slashing and chomping on the contents until there is no pride left. Just leaving behind a steaming pile of crushed hopes and dreams where a shining self-image once stood. The Javelin is not a pretty thing, yet if you pay attention to the details there is no question that it is an awesome looking and unjustifiably underrated muscle car. 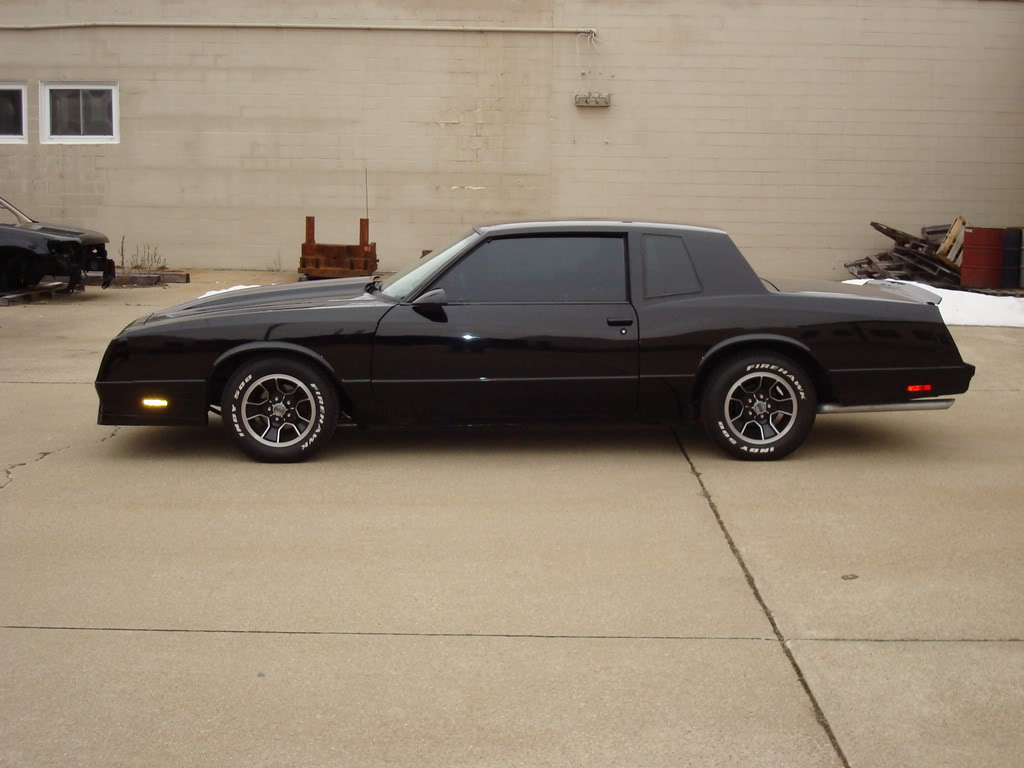 As I have already expressed, in my humble opinion, the 80s were a dark time for a lot of things. Hair, hair bands, Harry Belafonte's hairline to name a few. Cars are a prime example of this darkness. There are few things more uncompromisingly dull than an early 80s Buick Century. I imagine that an executive handed a design intern a block of wood and said, "Here, you have 30 seconds. Design a car." So he cut a straight line for the hood and a straight line for the trunk and left some space in the middle for a 4½-person family. He promptly handed the block back to the executive who responded with "Brilliant Gary! That will be our template for the next ten years. That reminds me Gary, your internship has been terminated due to the shutdown of your department. Good luck with that tuberculosis."

It was as unimaginative as using password as your password, or deciding to paint a car matte black. I say all this to illustrate how terrible something can be when truly uninspired but also the potential that same thing can have if you change a few details. Get rid of a couple doors, add a little character up front and some hips and voila! Those tweaks transformed that something from being a cure for insomnia to a highly explosive, muscly, ADHD lion with anger issues.

The hard angles of the body on the Monte Carlo SS reflect the persona of its stereotypical driver. It's solid, structured and won't be intimidated by the flash of some Gucci wearing prancing nag. This long-hooded, chisel-jawed machine is for the purebred red-white-and-blue-blooded American. The SS may have a scrunch-face, a flat-back, and only knows how to write the number 11, but it will make one heck of a show out of it. With smoke, fire and the sound of Satan's battle cry. It might not be the smartest or fastest but the Monte Carlo SS is not to be trifled with. 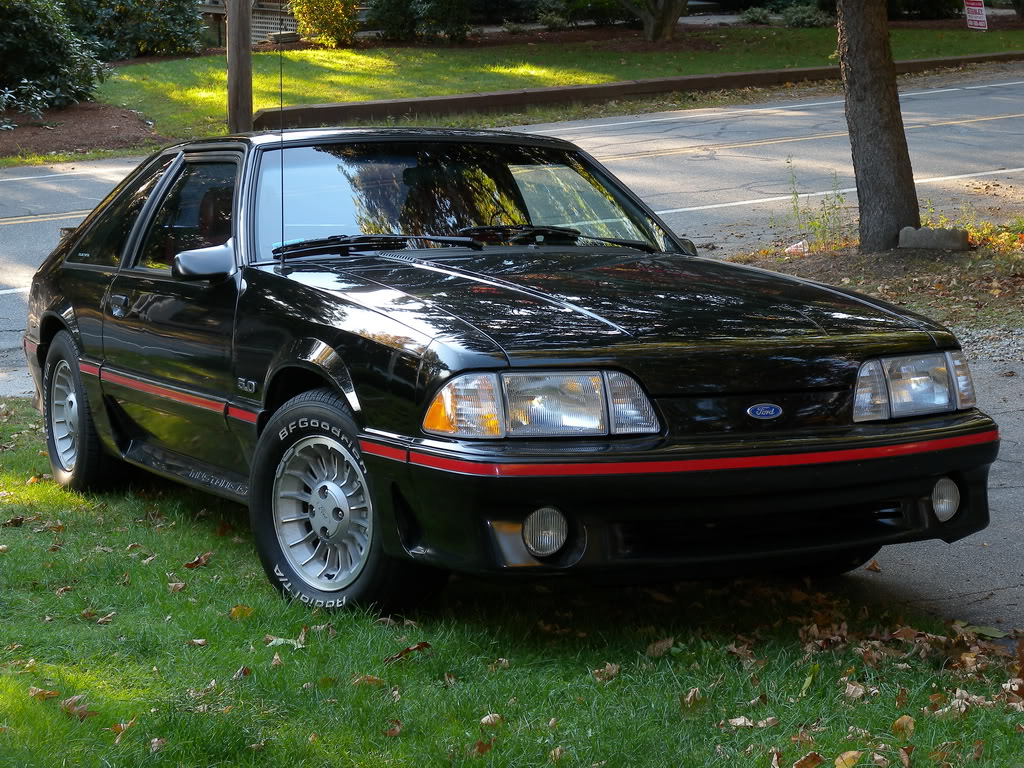 If I were to liken this car to a literary character, it would be Lennie from Of Mice and Men. It goes through the world with a dumb optimistic expression on the outside and dim-witted internals. It truly is an ungentle giant, something that can bring massive amounts of destruction just by petting the gas pedal a little too eagerly. For whatever reason, that's the charm of this car. What makes it so great is that it is so simple. It was designed with only a ruler and engineered with a wrench in one hand and a brew in the other. This pony makes our list by following an American tradition that we have mastered: Keep It Simple Stupid. 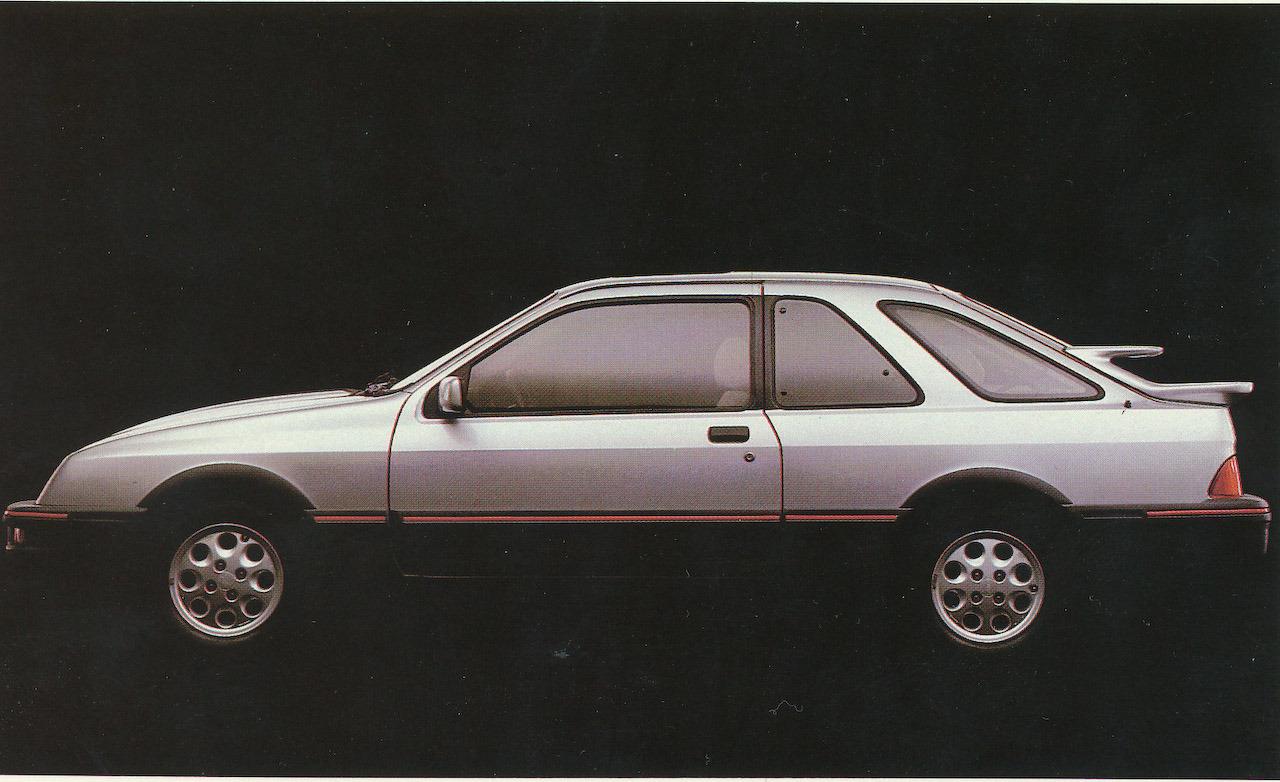 In 1985, Ford America decided to bring over one of their best selling Euro models, the Sierra. Unfortunately They had to rebadge it as the Merkur XR4Ti due to the fact that GM owned the rights to Sierra for one of their POS trucks. The idea behind the name Merkur was to segregate their American built cars from their German built cars. That was their first, and in the end, their fatal mistake. As I stated in the previous article, the name of a car is almost as important as the car itself. XR4Ti would be a fine name for a super powerful stapler or a pencil sharpener, but I dont wish to sit in a pencil sharpener, or tell people I drive a Merkur. A name I'm sure was conceived over a scrabble board by the same kind of knob (Jeff) who makes up words or adds "y" to the end of anything on the board to try and get bonus points. "Zoomy is totally a word! The act of zooming! To be zoomy!".

It's actually a shame because from an engineering standpoint the Merkur was just an improved Mustang. It had the same 2.3-liter turbo engine and 5-speed transmission, but also a much more sophisticated suspension system to let it compete with the crème de la crème of the European touring car circuit. As a car it was a feisty little scrapper, that deserves respect, but now let's address the butt ugly elephant in the room. This car is blob fish ugly. It's so ugly when released it was exclusively driven by carnies because it was the only car that demanded more attention than the bearded ladies or three-eyed midgets. So you may be asking why is it on this list? Ugly, sure, but what is the XR4Ti's redeeming feature? Well its very simple. IT COMES WITH TWO SPOILERS!!!!! If you spend enough money to make it look like the Sierra Cosworth racecar they can look pretty sweet, but really its the double-decker down force generator at the back that does it for me.

Do you agree with our list? What would be on your list? Let us know in the comments! If we made you mad tweet your angry thoughts to @Jalopnik